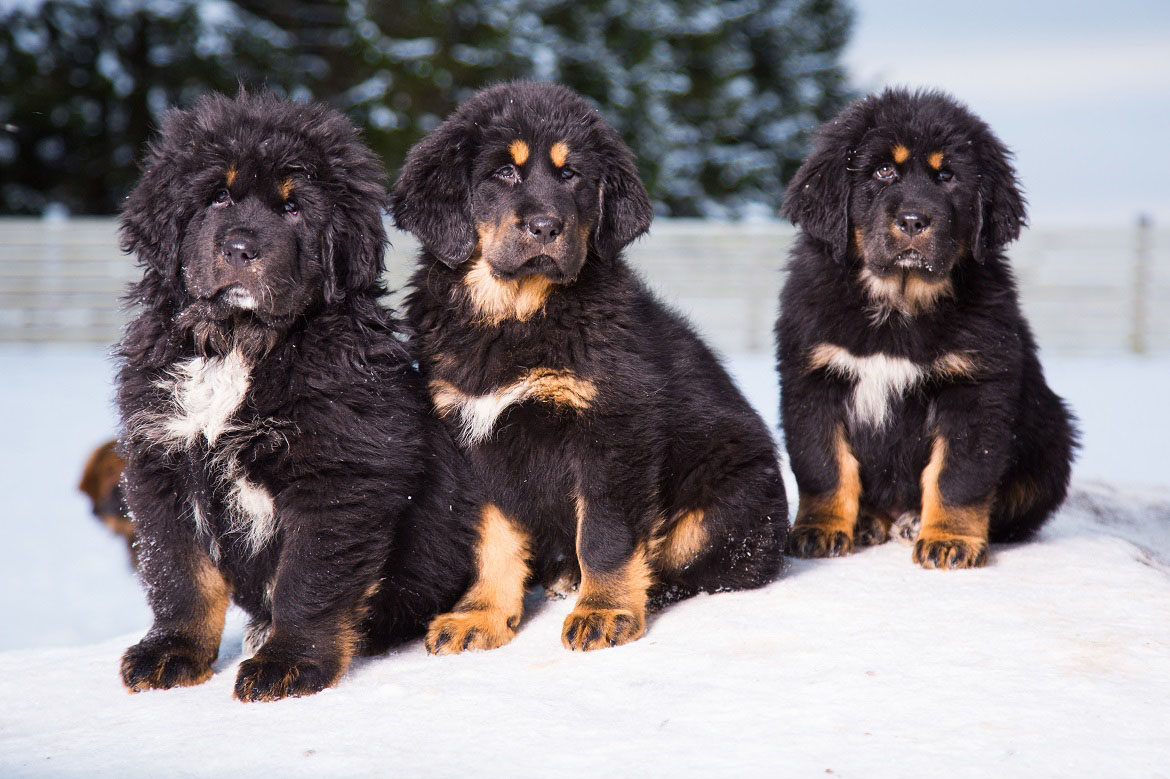 The Tibetan Mastiff is an ancient breed hailing from the Himalayan Mountains. Its origins are surrounded in mystery, and its breed lineage is quite primitive. Though the breed has been around for thousands of years, it is only recently gaining recognition in the United States. Here are six things to know about the majestic Tibetan Mastiff. Maybe it’s the right dog for you!

6 Things You Probably Did Not Know About The Tibetan Mastiff

They Were Originally Bred as Guard Dogs

Though the Tibetan Mastiff has only been recognized by the AKC since 2007, the breed has a rich history intertwined in the Himalayan Mountains and the plains of Central Asia. In Tibet, Tibetan Mastiffs have always been highly prized for their strong guarding abilities. According to the American Tibetan Mastiff Association, most large working dog breeds can trace their ancestry back to the Tibetan Mastiff. But the TM is quite a mysterious breed, having no formal recordings of its existence before the 1800s. This is partly because few Westerners were even allowed into Tibet up until that period. The Tibetan Mastiff remained a breed isolated to that region.

Today they are still highly sought after in Tibet as guard dogs, though you’d be hard-pressed to find a purebred. Tibetan Mastiffs in Tibet are typically tied to gates during the day and let loose at night to guard the homestead. Others work with shepherds, guarding against predators that could threaten the livestock or their master. But they are best suited to guarding homes since they are loyal and territorial by nature.

This may seem crazy, but it’s true. They don’t shed! But that doesn’t mean they don’t lose all that fur. Once a year the Tibetan Mastiff “blows its coat.” This means that for a brief period of time during the warmer months, the TM will be shedding like crazy. But for the rest of the year? No shedding at all! The AKC still recommends plenty of brushing. The Tibetan Mastiff has a long, double-layered coat that can get matted and messy. Brushing their fur is important whether it’s shedding season or not! But when the Tibetan Mastiff does blow its coat, brushing is extremely important. In fact, it should be a daily activity to ensure all the dead hairs don’t get tangled in the healthy ones.

They Can Be Destructive

Tibetan Mastiffs are bred to have strong jaws and teeth, ideal for a guard dog to properly perform its duties. On top of that, the Tibetan Mastiff is a very intelligent and independent dog. Without the proper training, a strong mouth and a bored mind can lead to some serious destruction in your home. This is especially true during the puppy years. The American Tibetan Mastiff Association repeatedly states that the key to combating unwanted behavior is lots of socialization. Keep things interesting by taking a Tibetan Mastiff on a variety of different walks. Bring your Tibetan Mastiff to the playground, to sports games, and other activities while they are still young and easily trainable. Exposing a Tibetan Mastiff to lots of new and different situations will keep their brain engaged and combat their tendency to be overprotective and find ways to entertain themselves.

For those interested in a Tibetan Mastiff, rescue organizations such as Tibetan Mastiff Rescue work to adopt well-trained, adult Tibetan Mastiffs to new families. This can be a wonderful alternative for a family that doesn’t have the time to housebreak a puppy, and cannot afford to risk all their things getting destroyed by a young Mastiff puppy.

Tibetan Mastiffs combine a fierce independence with a sensitive sweetness that doesn’t lend itself well to competition that other breeds might excel in. Though they can compete for the title of “Best in Show” in dog shows across the United States, Tibetan Mastiffs typically don’t do well. ATMA states that this is due to their stubbornness when it comes to basic obedience. Though they tend to be fast learners, it is not uncommon for a Tibetan Mastiff to challenge their owner when being given instructions. This is not because they don’t care for their owner. Tibetan Mastiffs are extremely devoted and sensitive to their families. However, they tend to think they know best – and will avoid listening to their master to prove it.

This is not to say it’s completely impossible! Many Tibetan Mastiffs have successfully learned and retained basic obedience and gone on to compete in obedience competitions.

As a guard dog, the Tibetan Mastiff’s instinct is to bark. Though this impulse is more subdued when the Mastiff is indoors, the dogs especially take to barking in the evening. It is recommended that a Tibetan Mastiff owner bring their dog indoors for the night. When they are left alone outside, this is when their guarding instincts will take over. The slightest sound could be seen as a threat, and with no owner there to tell them otherwise, the Tibetan Mastiff will set their own rules.

This night barking can be troublesome for neighbors, especially in close communities. But most Tibetan Mastiffs will be much more relaxed by their family’s side – during the daytime and the nighttime.

Though many may find their guarding instincts troubling and their size intimidating, Tibetan Mastiffs are actually famously wonderful with children. Proper socialization is key to bringing out a Mastiff‘s nurturing side. With plenty of exposure to children from puppyhood, the Tibetan Mastiff does very well. The guarding instincts drive them to keep children safe, and their sensitivity to humans ensures that they will always be gentle with those who they sense are vulnerable. Besides children, Tibetan Mastiffs are wonderful with their families. These dogs are extremely devoted to the family that cares for them – even if these dogs can be a bit stubborn! They always have their master’s best interest at heart.

Do you have a Tibetan Mastiff? Are you interested in owning one? Tell us about it!