The Shepadoodle is a high-energy cross between the German Shepherd and the Poodle, and he’s a fairly large dog who shouldn’t live in an apartment. A home with a large yard is ideal for this breed, who needs 1-2 hours daily of jogging, walking, hiking, or another form of exercise.

If he’s not properly exercised, the Shepadoodle may become destructive. He’s easily bored and is also prone to obesity. On the other hand, the Shepadoodle is extremely loving and loyal. He wants to be around his family as much as possible and should live indoors, surrounded by human companionship.

The naturally protective Shepadoodle makes an excellent guard dog or watchdog. He’s wary of strangers but generally gets along well with children and other pets, and he has an odd affinity for cats. Some socialization may be required to ensure that your Shepadoodle doesn’t exhibit aggression with other dogs, although this is rarely an issue.

Luckily, the Shepadoodle is intelligent, eager to please, and highly trainable. He enjoys learning new skills, but he expects a dominant leader, and it’s best if you have some level of experience training large dog breeds.

Most Shepadoodles shed minimally but do need daily brushing, and they should consume an average of 3-4 cups of dog food daily.

This healthy breed has an average life span of 12-14 years. Potential health issues include hip dysplasia, hypothyroidism, and Von Willebrand’s disease. Gastric sensitivity and bloat may also affect some Shepadoodles, and they can be prone to obesity.

The Shepadoodle is a good choice for a family who wants a large, loyal, and protective companion. At the same time, you must be prepared to handle the Shepadoodle’s high energy levels and exercise needs. 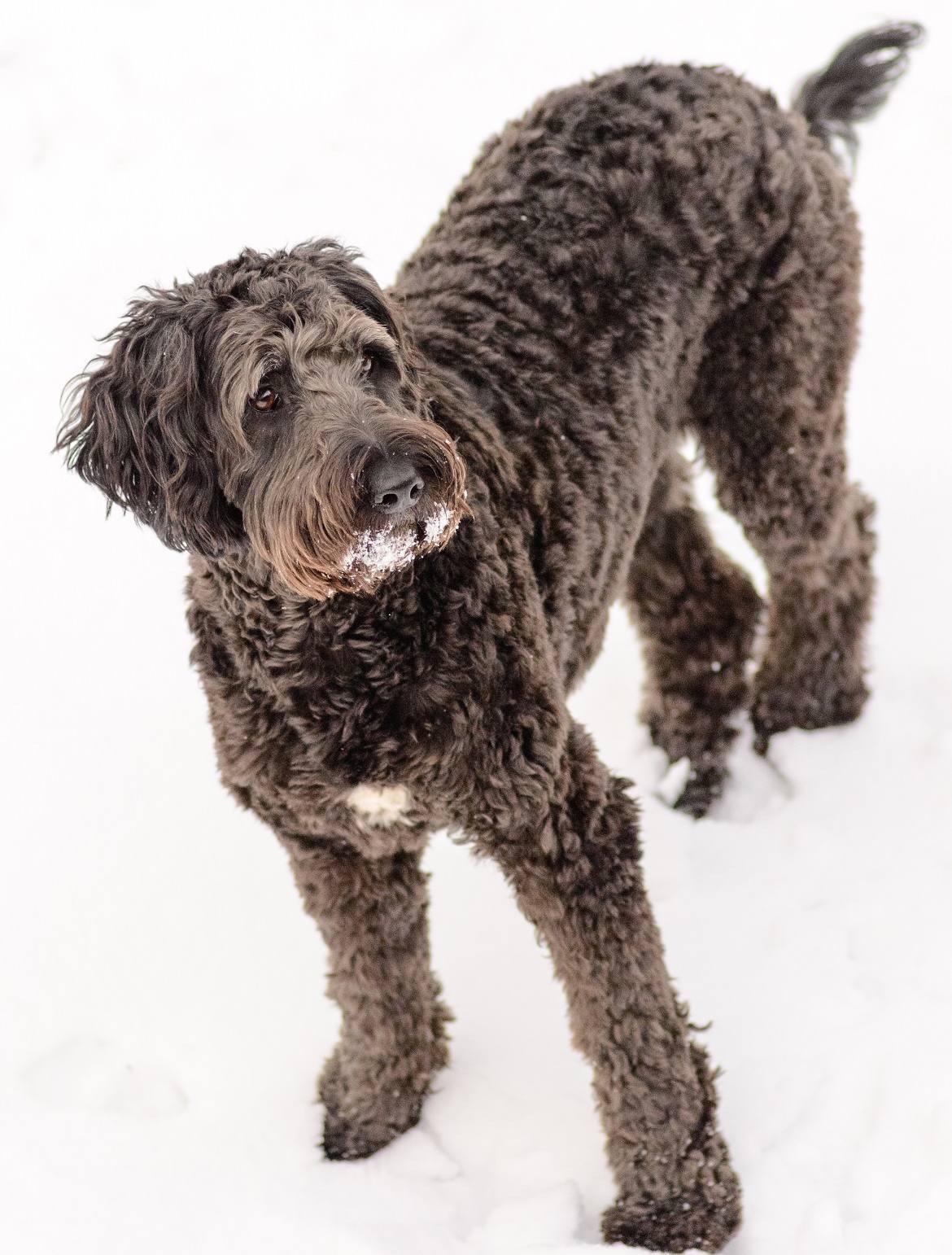 Average Life Span: 12-14 years
The Shepadoodle is a cross between the Poodle and the German Shepherd. Like all mixed breeds, the Shepadoodle is less prone to hereditary health issues than his purebred counterparts, but there is still a possibility that he may inherit health problems common to either parent breed.

Hip dysplasia may affect some Shepadoodles, and it occurs when a malformed hip joint results in the thighbone not fitting correctly into place. This leads to discomfort, pain, and limping, and it can cause arthritis or even lameness in more severe cases. Surgery can correct hip dysplasia. Dogs with this condition should not breed, so ensure that your prospective puppy’s parents have no history of hip dysplasia. Although it is hereditary, hip dysplasia can be triggered by rapid weight gain or injury, such as falling on a slippery floor.

Hypothyroidism is another possibility for the Shepadoodle, and it is the result of the thyroid gland producing insufficient amounts of hormone. Hypothyroidism can cause issues such as lethargy, obesity, infertility, and hair loss. It can be treated, but the affected dog will be required to take daily medication for the remainder of his lifetime.

Some Shepadoodles may experience bloat, which occurs when the stomach fills with gas, food, or fluids, resulting in a dangerous expansion that puts excess pressure on surrounding organs. In some cases, the stomach twists, trapping blood and preventing it from flowing to the heart and other vital areas. Bloat can be deadly, so take your Shepadoodle to the veterinarian immediately if you notice symptoms such as pale gums, excess drooling, failed attempts to vomit, or a swollen stomach.

The Shepadoodle may also experience some gastric sensitivity.

The average lifespan for the Shepadoodle is 12-14 years.

Although the temperament of any hybrid dog may vary, the typical Shepadoodle makes an extremely intelligent, loving, and loyal family companion. Developed by the United States Army to work as a military police dog, the Shepadoodle can also be an active and hardworking breed.

A large yard is recommended for the Shepadoodle, and he should not live in an apartment. He needs daily exercise and easily becomes bored and potentially destructive if these needs are not met. Ideally, the Shepadoodle should spend one or two hours daily jogging, walking, hiking, training, or playing. This breed should go on long walks and should have plenty of toys to play with in order to keep him both physically and mentally stimulated. He is prone to obesity if he is not active enough, as well as misbehaving and becoming destructive, so do not purchase this breed if you cannot commit to meeting his exercise needs.

The Shepadoodle wants to spend as much time with family as possible and should live indoors. He is likely to follow family members around the house and will want to be involved in all family activities. The Shepadoodle is generally excellent with children, although he should be supervised around younger or smaller children due to his size. Most Shepadoodles also get along well with other pets, and they have a unique love for cats. He may need socialization to ensure that there is no tendency to be aggressive or territorial with other dogs, but typically this is not an issue. The Shepadoodle is wary and suspicious of strangers, but this is one reason they make excellent watchdogs and guard dogs. They are naturally protective of their family and can even be too protective at times. Proper training will address this.

The Shepadoodle is a mix of two breeds who are known for their intelligence, making him highly trainable. He is also eager to please his owner and enjoys learning new skills. The Shepadoodle responds best to a dominant leader, and it is recommended that you have some experience training large breeds or receive assistance from an expert trainer in the early stages of training.

The Shepadoodle’s coat can vary, but they generally shed minimally, like their Poodle parent. Still, the Shepadoodle does need daily brushing to prevent tangling and matting.

Bathe your Shepadoodle as needed, and be sure to trim his nails regularly to prevent overgrowth and cracking. Check his ears weekly for signs of infection such as redness, tenderness, and odor. Brush his teeth at least 2-3 times weekly to maintain healthy gums and prevent bad breath.

The average Shepadoodle should consume 3-4 cups of high-quality dry dog food daily, split into at least two meals. This breed is prone to weight gain, so be sure to monitor his weight and food intake. The ideal type and amount of food for your individual dog will depend on factors such as weight, metabolism, age, and activity level.

Clean, fresh drinking water should be available for your Shepadoodle at all times.

The average cost of a Shepadoodle ranges from $250-$1,800, and price can vary depending on factors such as gender, breeder location and reputation, and the puppy’s parentage.

If you are able to adopt a Shepadoodle, expect adoption fees to cost up to $175.

Ranking takes into account a few basic factors including cost, skill level needed, high vs low maintenance and how critical regular training is to success. The Shepadoodle ranks a 1.5. He is a loving family companion who gets along well with most people and pets, although some may be dog aggressive. However, he needs at least one or two hours of exercise each day, and his coat requires daily brushing. He also requires mental stimulation and plenty of attention, making this breed a heavy time commitment.