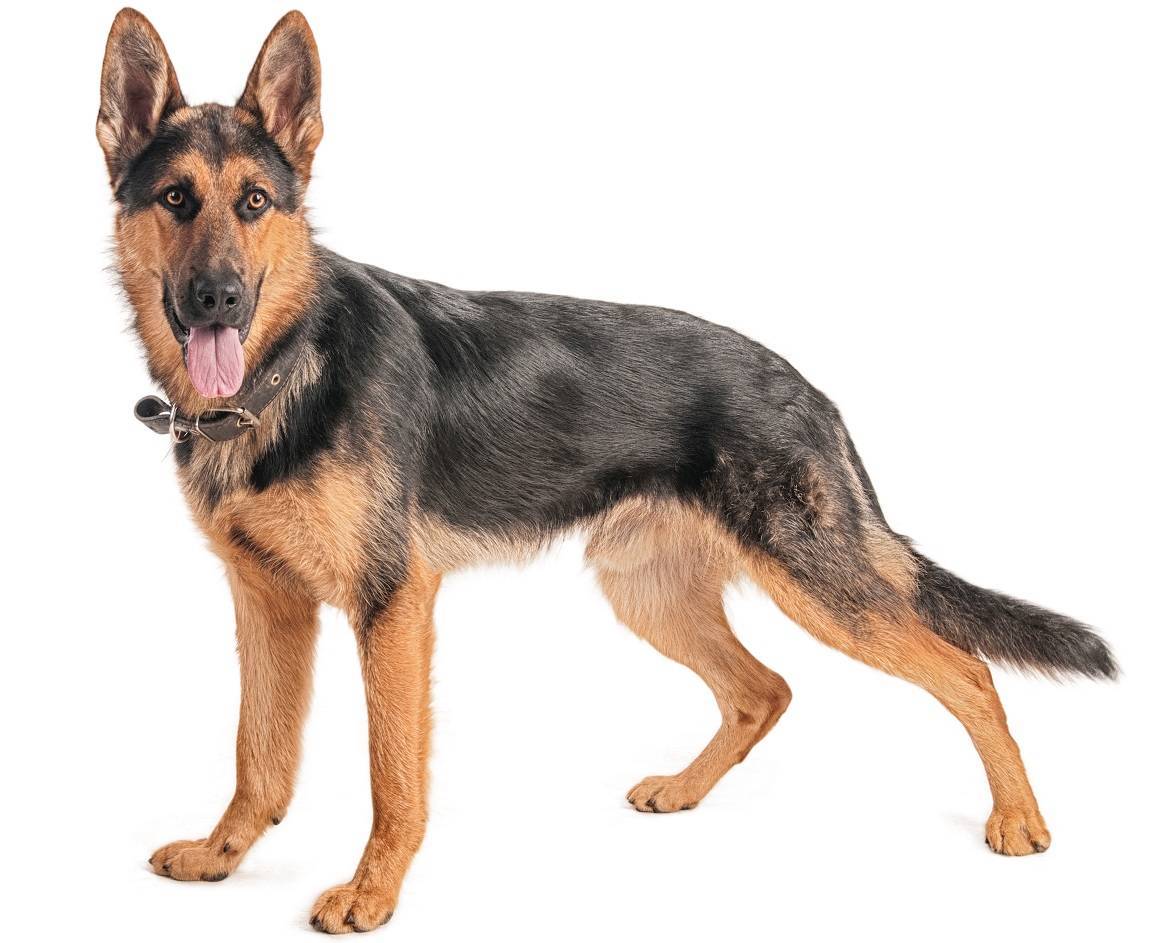 Average Life Span: 10-14 years
The German Shepherd has a few potential health problems that prospective owners should be aware of.

Joint issues such as hip and elbow dysplasia may affect some German Shepherd Dogs. These are degenerative conditions that result from malformed joints and can lead to discomfort, pain, and/or limping. In more severe cases, arthritis or even lameness can occur, and surgery may be necessary.

Gastric torsion, also known as bloat, occurs when the stomach fills with gas, fluid, or food and expands dangerously, putting excess pressure on other organs. The stomach sometimes flips, trapping blood in the stomach and preventing it from flowing to the heart and other essential areas. Bloat can be fatal, so take your German Shepherd to the veterinarian immediately if you notice symptoms such as pale gums, lethargy, failed attempts to vomit, excessive drooling, or a swollen stomach.

Degenerative Myelopathy (DM) is a possibility for the German Shepherd Dog, and it is a progressive spinal cord disease. Affected dogs seem unaware of the location of their back legs and are not able to move them properly. DM ultimately leads to lameness, and the dog most often needs to be put to sleep. In some rare cases, vitamin supplements may stabilize DM.

Exocrine Pancreatic Insufficiency (EPI) results in affected dogs being unable to properly digest and absorb food. Symptoms include gas, decreases in appetite and weight, and changes in stools. EPI can be treated with the addition of pancreatic enzymes to your dog’s food, and most dogs will enjoy a full recovery if properly treated.

Other potential health issues for the German Shepherd include allergies, epilepsy, vision issues, and hemangiosarcoma. The German Shepherd Dog may also suffer from heart diseases such as murmurs, an enlarged heart, and valve diseases.

The average lifespan for a German Shepherd Dog is 10-14 years.

The German Shepherd Dog is confident, brave, and extremely intelligent. He is also a dependable, versatile working breed who can perform a wide variety of jobs: herding livestock, working with police and the military, detecting drugs, visiting the sick, guiding the blind, performing search and rescue, and more. The German Shepherd thrives on working and having tasks to complete, and he will not be a happy, healthy dog if he is expected to simply provide companionship.

The German Shepherd should not live in an apartment, and access to a large yard is recommended. If he does live in an apartment, it is essential to take him outdoors and exercise him several times a day. He needs daily brisk walks and opportunities to run freely as often as possible, and he also enjoys jogging and playing catch. Mental stimulation is also a necessity, whether it is through training or completing other complex tasks. The extreme intelligence of this breed is wasted in a home where his skills are not utilized.

The German Shepherd should live indoors with his family. He may experience separation anxiety if he is left alone for long periods of time, and crate training is recommended to help combat this issue. The German Shepherd is a very loyal companion who can make an excellent guard dog. He may bark frequently, especially when he is bored. However, it is not difficult to teach him a “Quiet” command. He also likes to chew, so provide him with chew toys in order to discourage him from chewing household objects.

If properly socialized, the German Shepherd is excellent with children, being both gentle and protective. He can peacefully coexist with other dogs and pets if he is raised with them, but it may be difficult to introduce him into a home that already holds other animals. Some German Shepherds can be territorial or aggressive with unfamiliar dogs of the same sex. They are typically suspicious of strangers and somewhat aloof, but this is part of what makes them great guard dogs.

The highly intelligent German Shepherd is known for being extremely trainable. They do need a firm and consistent leader, but they can be trained to accomplish almost any skill in relatively short amounts of time.

The German Shepherd Dog sheds heavily and experiences an even heavier shed twice annually. Brush him 2-3 times weekly and be prepared to vacuum frequently.

Trim his nails monthly to prevent overgrowth and cracking. Check his ears weekly for signs of infection such as redness, tenderness, and odor. Brush his teeth a few times a week to maintain good overall health and prevent bad breath.

On average, the German Shepherd should consume 3-4 cups of high quality dry dog food daily, with his food being split into at least two smaller meals.

Take precautions against bloat by ensuring that your German Shepherd does not eat too rapidly, preventing him from drinking excessive amounts of water immediately before or after eating. Ensure you allow atleast an hour between your dog eating and being physically active. Do not feed him from a raised food bowl and avoid giving him table scraps.

As with all dogs, plenty of drinking water should be available for the German Shepherd at all times.

Looking for a German Shepherd?

The cost of a German Shepherd can range widely, with listings from $500-$2,500. As always, pricing depends on factors such as gender, breeder location, and pedigree. German Shepherd prices will also take into account if the puppy is considered show quality, pet quality, or expected to be an exceptional working dog.

If you adopt a German Shepherd, expect adoption fees to be around $200, possibly higher or lower depending on your location.

Ranking takes into account a few basic factors including cost, skill level needed, high vs low maintenance and how critical regular training is to success. The German Shepherd ranks a 1.5. He is one of the most intelligent dog breeds in the world, making him very versatile and famously trainable. However, he should not be utilized simply as a companion dog and thrives on having jobs to complete. He also may struggle with separation anxiety, and he sheds heavily year-round.