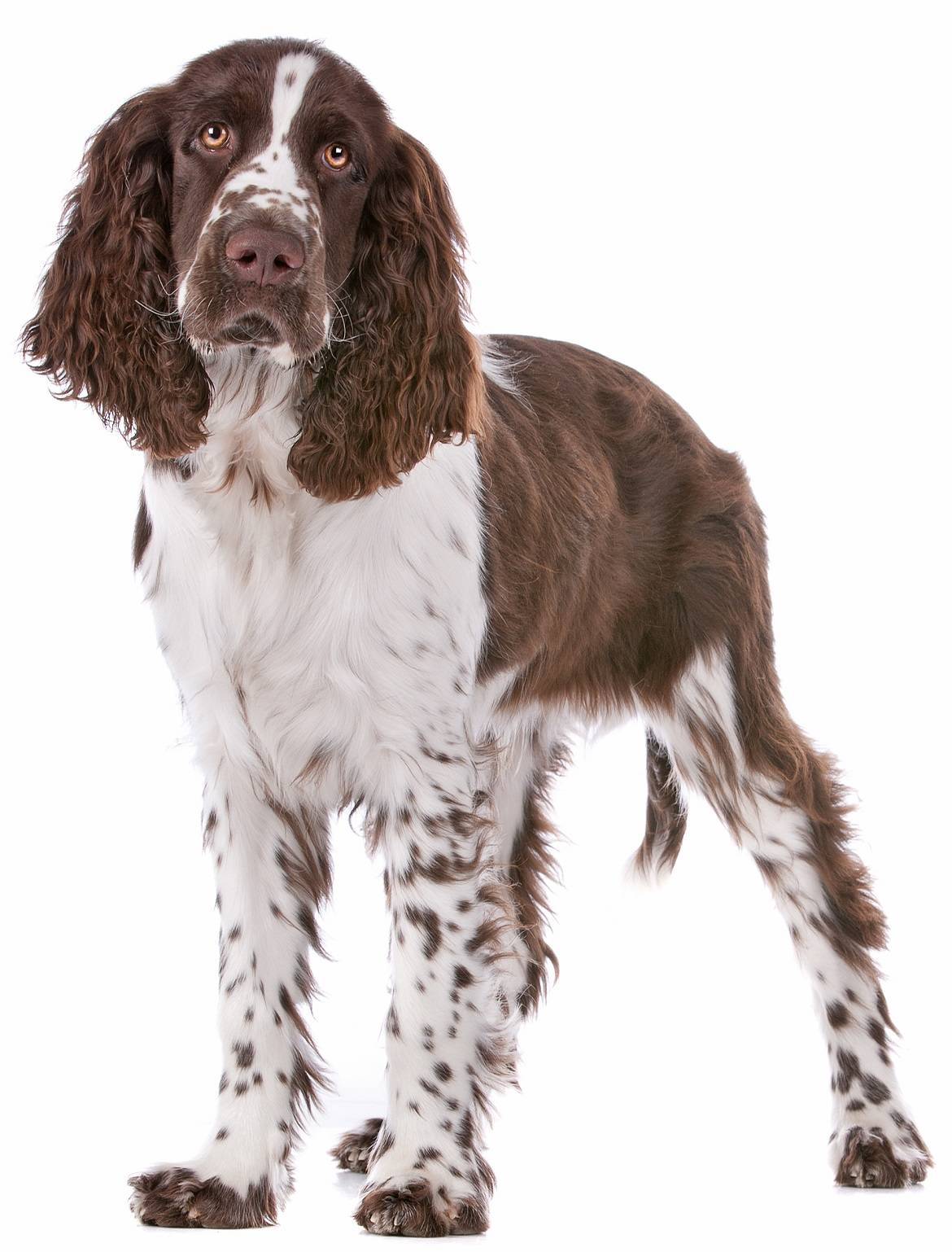 Average Life Span: 10-14 years
Among some of the most popular purebreds in the dog world, the English Springer Spaniel is a healthy breed overall throughout their lifetime. However, there are a few serious and minor health conditions that could make an appearance when the pup is middle-aged or older. Few puppies of the English Springer Spaniel breed develop signs of problematic health conditions at a young age, but you should still have your new pup checked regularly for signs of developing health issues.

Two of the most prevalent health concerns that affect an English Springer Spaniel include:

Most of the time, this condition is the symptom of a more severe health issue. Thorough vet examinations are required to rule out underlying health conditions, but antibiotics can be prescribed to combat the initial infection. This condition results in inflammation of the middle and external ear canal. It can be quite painful and itchy, so your pup may have to wear a cone until it heals.

Known as progressive vision loss, PRA is a genetic condition that occurs when the retina begins to degenerate. It could be one eyes or both eyes, but the result is total vision loss. Symptoms include obvious disorientation, lack of interest in daily activities, and lethargy. While incurable, surgery may help pups retain their eyesight for a little longer.

Other health conditions that pet owners should have concern for are elbow and hip dysplasia, skin allergies, cherry eyes, and hypothyroidism. There are also a few health issues, such as heartworms and heart disease, that can affect any dog of any breed at any age. The average lifespan of an English Springer Spaniel is 10 to 14 years.

Lively, affectionate, and alert, the English Springer Spaniel would make a fantastic watchdog and family companion. These cheery pups are great with children, but they can be wary of strangers, and downright aggressive towards other dogs. Socialization and training are encouraged to create a better-suited, well-rounded pup for your home.

English Springer Spaniels will love everyone in a household, but she may bond more with a single person in the family. She will want to be in the company of that person the most, lavishing them with attention and asking for affection in return. These canines do well on their own for a few hours, but they get bored easily. Boredom leads to destructive behavior, so invest in a few indoor toys to keep your English Springer Spaniel well-entertained.

For an English Springer Spaniel, training and exercise could go hand-in-hand… errr, paw-in-paw. These pups are energetic and boisterous, so you could teach them different commands while they romp and run and play outdoors. Pick an open space and issue instructions in a positive, kind voice with a clear, concise tone. Reward your pup for obedience with meaty, bite-sized treats and lots of praise. On non-training days, take her to a dog park, let her run in a fenced-in backyard, or take her for a couple of long walks.

English Springer Spaniels are a bit high maintenance, as they are fluffy with lengthy, soft, double coats. She is a moderate shedder, but that shedding worsens as the weather heats up. She will fluff up again when the weather cools down. Brush her daily with a firm-bristled brush to draw away excess hair and unkink knots and tangles. Bathe her once a month, or whenever she gets smelly.

Further basic care musts include clipping her toenails every 2-3 weeks, brushing her teeth every night, trimming her fur every 6-8 weeks, and cleaning her ears once a week. The latter is critical, as the English Springer Spaniel’s ear canals are prone to infection. This is, in part, due to the surrounding hairs dragging debris into the ear canals.

Looking for an English Springer Spaniel?

Well-bred English Springer Spaniel puppies, from a well-respected, reliable breeder, vary in cost. But the average cost is somewhere in the ballpark of $750 to $1,800. Several determining factors affect the cost of an English Springer Spaniel, such as pedigree, documented bloodlines, health issues, anticipated lifespan, and AKC show qualities. The pups considered of higher breeding for show purposes are the more expensive of the breed. Whereas, the pups that are bred specifically for family companionship will be less expensive.

While rare, you might get lucky looking for English Springer Spaniels at a local rescue group or animal shelter. Adoption fees vary by state and county, but the general range is between $75 to $250. This, of course, fluctuates with shelter regulations in different areas, but most shelters offer health add-ons that require an additional fee. You could wind up spending $400 to $500 on a successful English Springer Spaniel adoption.

You should also factor in other costs, such as the necessities that your English Springer Spaniel needs, both long term and short term. For example, toys, nutrient-rich kibble, a microchip, a leash and collar with updated dog tags, regular vet check-ups, routine vaccinations, and a fund for just-in-case medical emergencies.

Ranking takes into account a few basic factors including cost, skill level needed, high vs low maintenance and how critical regular training is to success. English Springer Spaniels rank a 1.5 on the integration scale. These pups are friendly and affectionate, but their high-maintenance grooming regimen can be pricey and time-consuming. If you have the time and energy to commit to these pups, then by all means, she would be the perfect fit for your family.