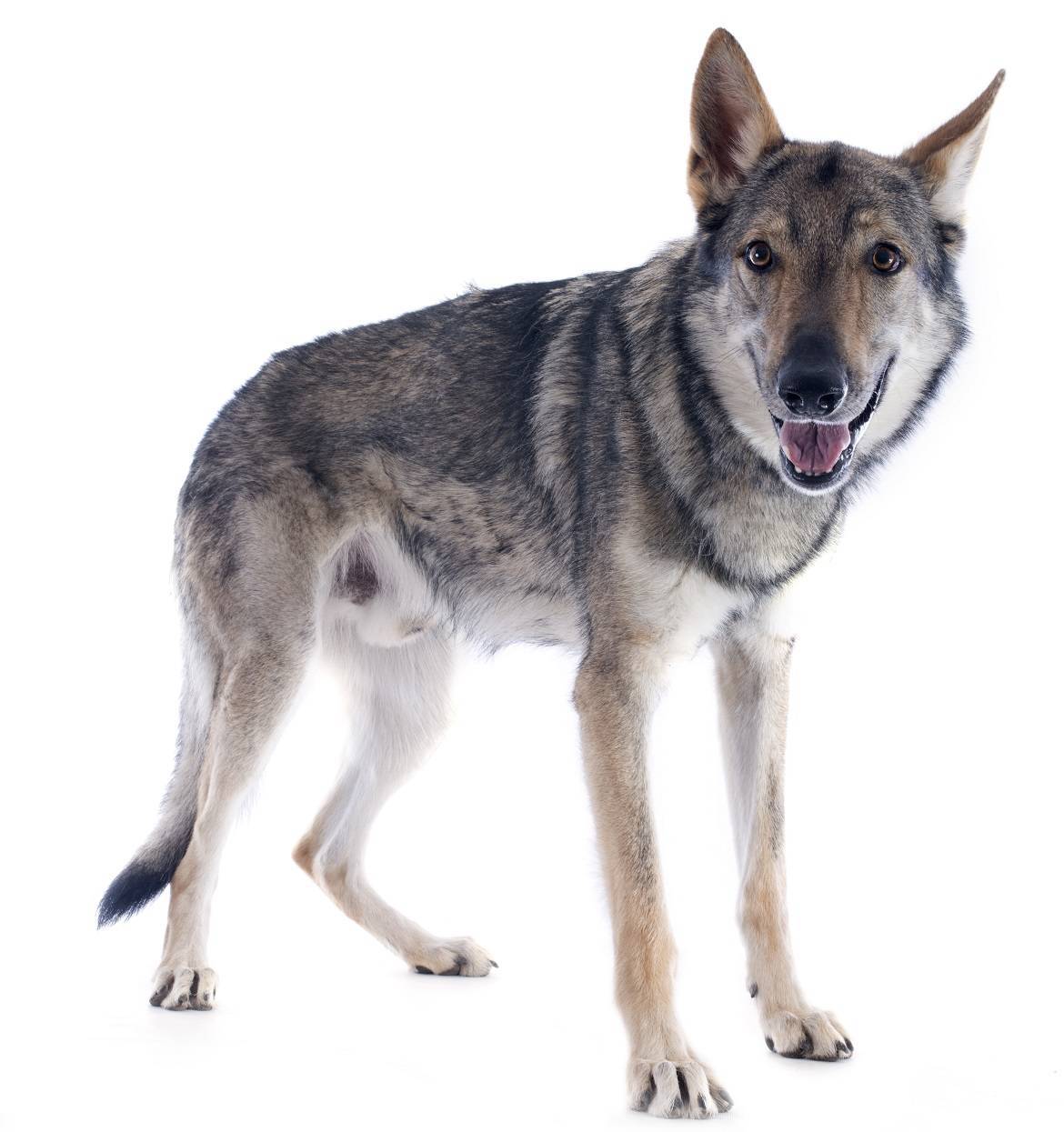 Average Life Span: 12-18 years
The Czechoslovakian Wolfdog originated as the product of an experiment conducted in Czechoslovakia to determine if it was possible to successfully interbreed the German Shepherd and the Carpathian Wolf. The original goal was to create a healthier breed that would not be prone to the hereditary health problems experienced by most dog breeds. The Wolfdog, who looks almost identical to a wolf, is in fact extremely healthy and experiences very few health problems.

The only canine ailments known to plague some Wolfdogs are hip and elbow dysplasia. Hip dysplasia occurs when the thigh bone cannot fit properly into the hip joint as a result of the joint being malformed. Although it is hereditary, it can be triggered by rapid weight gain or injury. Elbow dysplasia occurs as a consequence of a deformed elbow joint. Both disorders are progressive and can cause pain, limping, and, in more severe cases, arthritis or even lameness. Surgery may be needed to treat severe cases.

Wolfdogs have a longer than average lifespan, with most living 12-18 years.

The Czechoslovakian Wolfdog is an active, confident, and alert dog who looks virtually identical to a wolf. He is also extremely loyal to his family, and he is very spirited and playful. He can be extremely strong-willed and is not recommended for a first-time dog owner.

The ideal home for the Wolfdog would be a house with a large yard. The yard should be fenced because Czechoslovakian Wolfdogs have strong roaming instincts. They can roam a long distance in a short period, and they may not return to their homes. Although some believe that this breed can adapt to apartment living, this is not recommended. He needs at least an hour of strenuous physical activity each day, and he should have plenty of space to run. The Czechoslovakian Wolfdog does very well in cold temperatures, but he can adapt to other climates as well. This breed is typically good with children who live in the same home, but they do best with older children, and they should always be supervised around unfamiliar children. They should not be trusted with smaller pets, and they are dog aggressive. They are also wary of strangers and treat all unknown people with suspicion.

Due to this suspicion of strangers, they do make excellent guard dogs, and their appearance is intimidating in itself. Wolfdogs do not bark, however, though they do howl and make other noises. Their howl can be very loud, but they have to be trained to bark, and this can be difficult for Wolfdogs because it is not natural. Although wary of strangers, the Czechoslovakian Wolfdog is extremely loyal to their families, to the point that they are highly difficult to rehome once they become attached. Since they are part wolf, they have a pack mentality, and their family becomes their pack. Although some are still not openly affectionate, many become affectionate and playful with their human pack.

Not surprisingly, the Czechoslovakian Wolfdog is considerably harder to train than the average dog. He can be extremely strong-willed and does not like to do anything without seeing a reason to do so. He is also very intelligent and gets bored quickly with repetitive exercises and techniques. He needs firm leadership; you must clearly demonstrate that you are in charge. Use positive reinforcement like bits of meat, extra play time, and verbal praise to motivate your Wolfdog. Keep sessions challenging and varied to hold his interest. Although training a Wolfdog is not for a first-time dog owner or someone who is tentative about dog training, he is highly trainable if he is motivated and has strong guidance.

The Czechoslovakian Wolfdog sheds heavily in general, but he experiences extremely heavy sheds twice a year, at which point his coat almost entirely replaces itself. Be prepared to spend time vacuuming after your Wolfdog. In general, a weekly brushing (or even less) is sufficient for this breed.

Bathing is required only very rarely because the Wolfdog’s coat sheds dirt and the wolfdog is virtually odorless. Trim his nails as needed, and brush his teeth 2-3 times a week to maintain healthy gums and prevent bad breath. Although the Czechoslovakian Wolfdog is not prone to ear infections, you should still check his ears regularly for signs of infection like redness, tenderness, or odor. Also ensure there is no excessive buildup of wax, dirt, or debris.

Be sure your dog has clean, fresh drinking water readily available at all times.

Looking for a Czechoslovakian Wolfdog?

The Czechoslovakian Wolfdog is naturally a very rare breed and can be difficult to find. The majority are bred in the Czech Republic and the Slovak Republic. If you can find a Wolfdog, prices may vary widely, from $500-$1,400.

Ranking takes into account a few basic factors including cost, skill level needed, high vs low maintenance and how critical regular training is to success. The Czechoslovakian Wolfdog ranks a 4. He is an exceptionally healthy breed with a long lifespan, and he is an excellent guard dog who is loyal to his family. However, he needs plenty of exercise and extensive socialization, he is stubborn and likes to roam, and he is more difficult to train than the average dog. He sheds quite a bit and may howl loudly, and he is difficult to find.