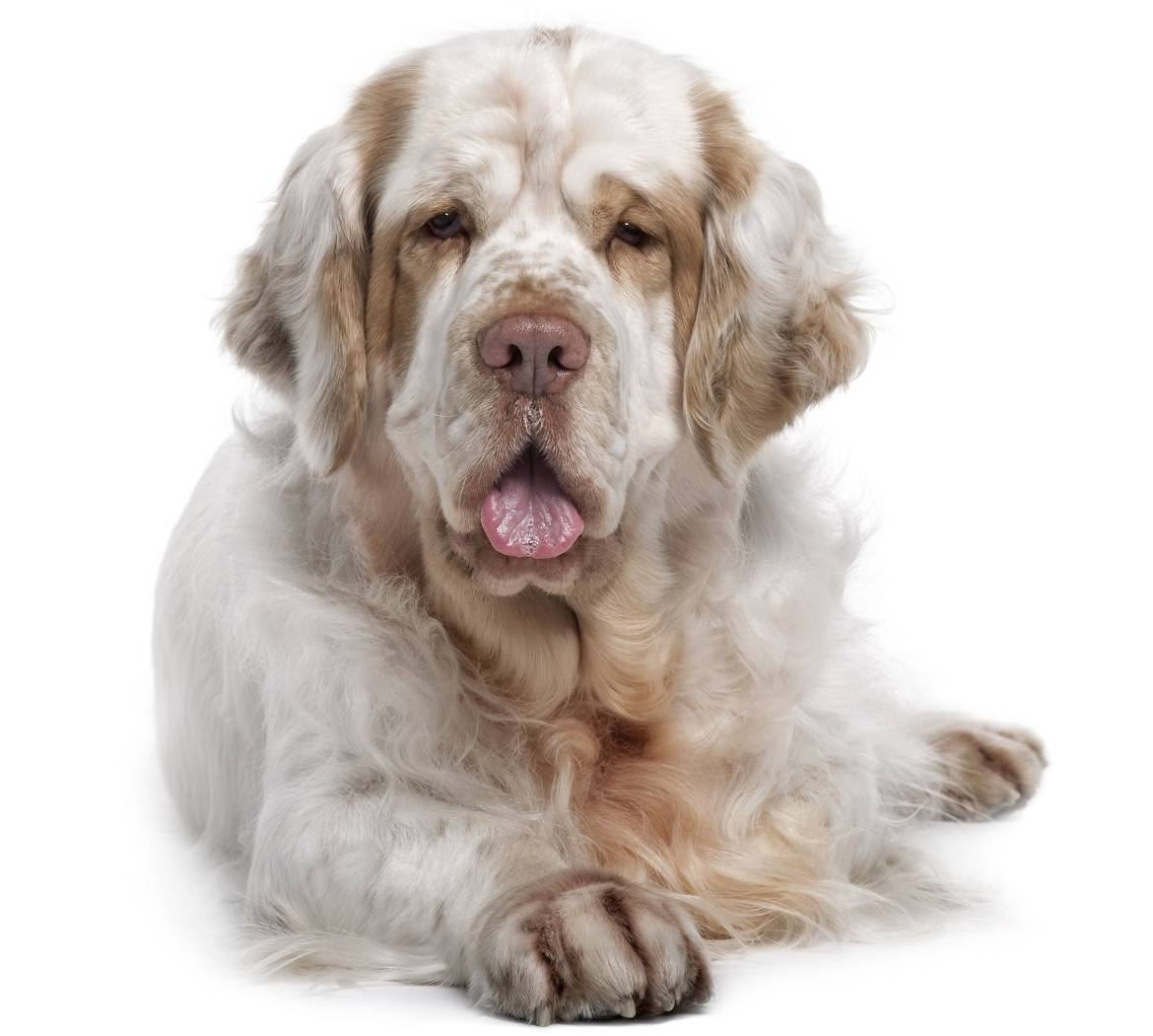 Average Life Span: 10-12 years
Clumber Spaniels are a generally healthy breed, but they are prone to some health issues such as elbow and hip dysplasia and various eye problems.

They do have a very high rate of hip dysplasia, a genetic condition in which the thigh bone does not fit properly into the hip joint. Similarly, elbow dysplasia involves a weak or malformed joint that can result in arthritis or, in severe cases, lameness. Elbow dysplasia is a degenerative disease. Due to the high incidence of joint problems among Clumber Spaniels, it is important to monitor your puppy’s playing carefully. Do not let him overly exert himself, jump frequently, or run on slippery floors while his joints are still developing.

Prone to eye problems, Clumber Spaniels may suffer from ectropion or entropion. Ectropion is when the eyelid sags or rolls outward. This exposes the eye and makes irritation and infections such as conjunctivitis more likely. Entropion is when the eyelid rolls inward, resulting in injury or irritation to the eyeball. Entropion may self-correct once your Clumber is around or two or three, but surgery is a potential solution as well.

Hypothyroidism, in which the thyroid produces insufficient amounts of hormone, may affect some Clumber Spaniels. Hypothyroidism leads to issues such as obesity, lethargy, infertility, and hair loss, but it can be treated with a thyroid replacement pill. The medication must be taken daily for the duration of the dog’s life.

A hereditary condition called pyruvate dehydrogenase phosphatase 1 deficiency is another potential ailment. This condition results in exercise intolerance and may lead to heart and lung issues.

The Clumber Spaniel’s floppy ears make him predisposed to ear infections because they hold in moisture, making his ears an excellent breeding ground for bacteria. Check your Clumber’s ears often for signs of infection. Reoccurring or chronic ear infections may indicate a food allergy.

Most Clumber Spaniels will not be affected by these health problems, and they have an average lifespan of 10-12 years.

The Clumber Spaniel is known for being a loyal, affectionate, and affable dog. He is very dignified and sometimes described as “gentlemanly,” but he also has a mischievous sense of humor and can be playful. He is a reliable, sweet companion with a bit of a stubborn streak and a tendency to get into things and potentially scavenge for food.

The Clumber Spaniel can get along well in almost any household. He is good with children, although he may steal food from them if he can reach it. He is friendly with other dogs, cats, and smaller pets, particularly if he is familiar with them. He may initially be aloof and overly dignified with strangers but becomes friendly and playful over time. The Clumber Spaniel is mellow and may spend large stretches of the day lying around or sleeping, but he does need at least twenty to thirty minutes of walking or exercise daily. He was developed to hunt game birds and can become bored without adequate exercise, resulting in chewing and destruction. It is also important to ensure that he does not become overweight and place too much strain on his joints. He has great stamina for hunting or hikes, and he loves water.

Most Clumber Spaniels are quiet and do not bark often. This can be a good quality, but it also means that they do not make great guard dogs due to their friendly and quiet natures. They do shed moderately to heavily year round, and they slobber and drool more than the average breed. They are also prone to gassiness, but adjustments to their diets will help. They are known for sometimes being scavengers and making messes in the house, especially as puppies. Some Clumber Spaniels never fully grow out of this behavior, making proper training essential.

On the plus side, Clumber Spaniels are intelligent and have an inherent desire to please. However, they are independent and stubborn, so training a Clumber requires patience and consistency. Do not be harsh; they will respond only with increased stubbornness. Instead, be clear and consistent in enforcing rules and expectations. Use positive reinforcement and encouragement. Crate training is a good way to curb your Clumber’s mischievous household behaviors, aid in housebreaking, and provide a safe, comfy space in the home.

Clumber Spaniels are moderate to heavy shedders, and you will need to brush his coat daily to minimize loose hairs. You will also need to be prepared for frequent vacuuming. Trimming excess hairs on your Clumber’s ears and feet will also be needed.

Bathe as needed. The Clumber Spaniel does have a white coat that can hold large amounts of dirt and debris, so bathe as often as you wish, but be sure to rinse thoroughly to prevent itchiness. Also be sure to dry his ears well in order to avoid infection.

A Clumber Spaniel should typically eat 2-2.5 cups of food daily, although a puppy many need 4-6 cups. Divide the food into two meals daily and be sure to avoid overfeeding. Becoming overweight is dangerous for the Clumber Spaniel and the health of his joints, so monitor his weight. The correct amount of food for your adult dog will vary depending on factors such as activity level, size, build, gender, and age. Feeding your Clumber a natural diet of fresh foods and real meat can help reduce problems with gassiness.

Be sure your dog always has access to fresh, clean drinking water.

Looking for a Clumber Spaniel?

Clumber Spaniels are a fairly rare breed, with only about 200 puppies being registered in the United States annually. Cost typically ranges from $800-1600 and varies according to factors such as breeder location and pedigree.

Ranking takes into account a few basic factors including cost, skill level needed, high vs low maintenance and how critical regular training is to success. The Clumber Spaniel ranks a 3. Clumber Spaniels are an extremely friendly and affable breed that can get along well with children, adults, dogs, and smaller pets alike. However, they shed and drool frequently and have a tendency to get into things inside the home. They also have a strong stubborn streak and can be difficult to train properly, and they need to be monitored for health problems such as joint pain and ear infections.