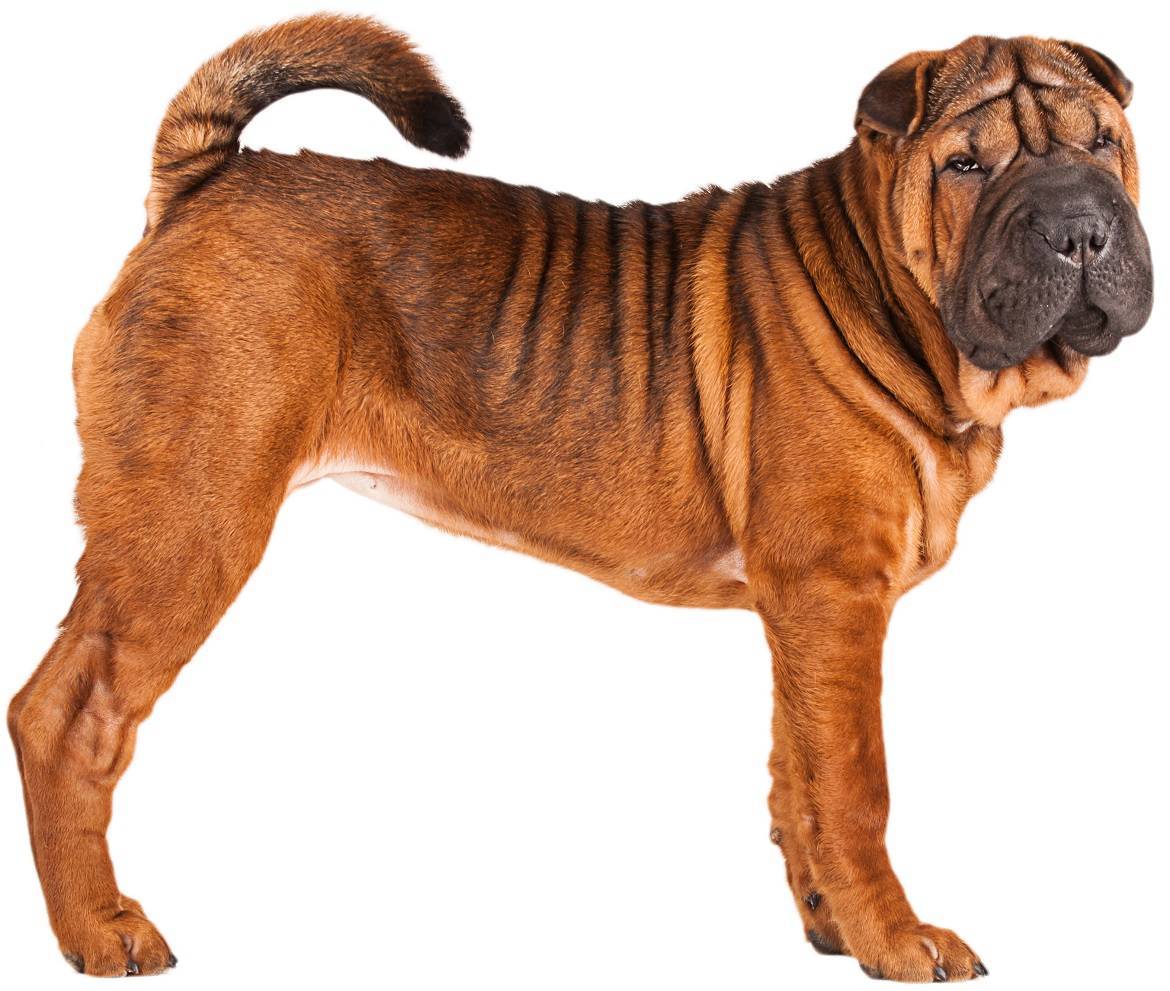 Average Life Span: 10-12 years
The Chinese Shar-Pei is prone to quite a few health problems, especially a variety of skin conditions. It is wise to choose a veterinarian who is knowledgeable about Shar-Pei and to be prepared for the possibility of extensive veterinarian costs. Of course, not all Shar-Pei will have all or even any of these issues, but it is important to be informed. Some of the most common health problems for Chinese Shar-Pei are listed here.

Particular to this breed is Shar-Pei Fever, also known as swollen hock syndrome, in which one or both of the hock joints swell, leading to abdominal pain, vomiting, diarrhea, lethargy, and shallow breathing. Your dog may experience fevers ranging from 103 to 107 degrees. Shar-Pei Fever can be treated with fever and pain reduction.

Chinese Shar-Pei may be prone to cancer. Symptoms of cancer include difficulty breathing, sores that do not heal, swelling of bumps or sores, and bleeding from body openings.
A variety of joint problems may plague some Chinese Shar-Pei. Elbow and hip dysplasia are somewhat prevalent among this breed. Elbow dysplasia is a degenerative disease involving a weak, malformed elbow joint. Ultimate consequences of elbow dysplasia vary from arthritis to lameness. Weight and medical management, as well as anti-inflammatory medications or surgery, can help treat this condition. Hip dysplasia occurs when the thigh bone does not fit properly into the hip joint. Patellar luxation, in which the knee joint slides in and out of place, may also occur. Additionally, Chinese Shar-Pei may suffer from Osteochondrosis Disseccans, or painful stiffening of joints, most commonly at the elbow. Overfeeding of high protein foods may cause this problem.

A plethora of skin conditions may impact the Chinese Shar-Pei as well. Demodetic Mange is caused by the demodex mite, which is transferred from the mother to her puppies soon after birth. These mites usually do not cause serious problems, but Shar-Peis with weaker immune systems can develop scaly red patches of balding skin. Demodetic Mange may clear up on its own, but it is advisable to take your dog to the vet to ensure that the red patches do not spread over the body. Seborrhea, flaky skin accompanied by a foul odor, also occurs. This is usually a secondary infection resulting from other infections, diseases, or allergies. Treat seborrhea by treating the primary condition or using medicated shampoo. Pyoderma is a bacterial infection of the skin that can be treated with antibiotics. It is sometimes caused by allergies or hypothyroidism, a condition that occurs when the thyroid gland does not produce sufficient amounts of hormone. Cutaneous mucinosis involves the formation of clear, oozing bubbles on the skin. This condition is caused by an excess of mucin, the substance that causes wrinkling of the skin, and can be addressed with the administration of steroids.

Despite all of these potential health problems, the Chinese Shar-Pei has a respectable life span of 10-12 years.

The Chinese Shar-Pei originated in southern China, where he functioned as a hunter, herder, guardian, and pit fighter. He is intelligent, confident, and extremely loving, loyal, and devoted to his family. He can also be stubborn, dominant, and willful. Chinese Shar-Pei are typically not recommended for first-time dog owners and require firm, consistent leadership to prevent issues with stubbornness and aggression.

The Chinese Shar-Pei can thrive in almost any living situation. An apartment is acceptable for a Chinese Shar-Pei as long as daily exercise is possible. They do enjoy being outdoors and having the opportunity to run and stretch their legs. Although the Chinese Shar-Pei is extremely loving towards his owner, he is aloof and somewhat snobbish towards strangers. He does best with older children who know how to respect animals, although he can do well with younger children if raised with them and properly socialized. Once a pit fighter, he is dog aggressive and, again, must be properly socialized early and often.

Fortunately, the Chinese Shar-Pei is very clean and easily housebroken. He is able to be mannerly and quiet inside the home. He does not bark unless he is playing or concerned. He does snore, snort, and drool. His short nose makes him sensitive to the heat, so it is important to keep him indoors around air conditioning or fans in hot weather. Otherwise, he could easily get heat stroke. He is extremely protective of his family and makes an excellent guard dog.

When it comes to training a Chinese Shar-Pei, beginning early is a must. You must be firm, consistent, and dominant to teach him respect and obedience. He does genuinely want to please his owner and is responsive to training, but he can also be extremely obstinate and try to assert dominance at times. He may also get bored during training, so it is important to challenge him and to vary exercises and the order in which they are performed. As the owner of a Chinese Shar-Pei, you must be willing to commit to early, frequent training and socialization and be prepared for the possibility of aggressive behavior (although typically this behavior will be directed at outsiders, not his family).

A Chinese Shar-Pei will be either “horse-coated” (shorthaired) or “brush-coated” (longer hair). Both variations shed minimally and usually require weekly brushing. However, the occurrence of skin problems may call for daily brushing and weekly bathing.

After bathing a Chinese Shar-Pei, be sure to thoroughly wipe and dry his wrinkles and skin folds to prevent the occurrence of yeast or fungal infections. Also wipe and dry your dog thoroughly any time he gets wet, such as being outdoors in the rain.

Clean his ears regularly because his small, tight ears make him prone to ear infections and other issues. Brush his teeth often to prevent gum disease and bad breath. Cut his nails once or twice a month. Chinese Shar-Pei detest getting their nails trimmed, and you may want to leave this task to a professional.

Feed your Chinese Shar-Pei 1.5 to 2 cups of high quality dog food daily, divided into at least two meals to prevent overfeeding. Avoid high protein diets that may contribute to skin problems.
Be sure that clean, fresh drinking water is always available, especially in hot weather.

Looking for a Chinese Shar-Pei?

Although fairly common, the Chinese Shar-Pei typically costs between $800 and $1500. Pricing depends on factors such as breeder location, gender, pedigree, and whether the puppy has potential to be a show dog.

Ranking takes into account a few basic factors including cost, skill level needed, high vs low maintenance and how critical regular training is to success. The Chinese Shar-Pei ranks a 4. They are adaptable to most living environments and are very loving and devoted to their families. However, they are prone to many health problems and may require hefty veterinary bills. Additionally, they have a tendency towards stubbornness and aggression and require early, frequent training and socialization, as well as a dominant and firm owner who can earn their respect.