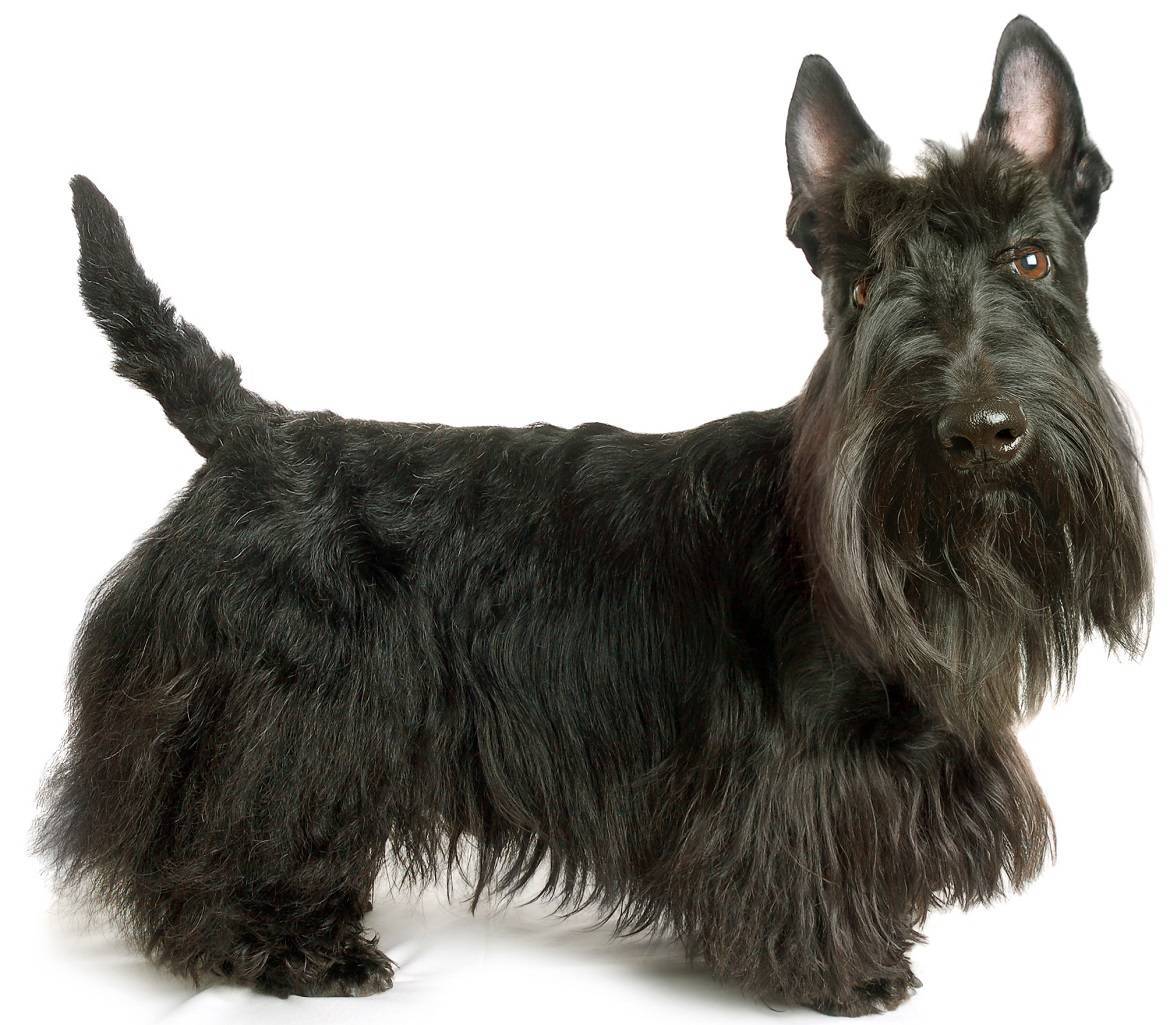 Average Life Span: 12-15 years
The Scottish Terrier, a lively purebred, has its fair share of minor and complex health issues. These health problems are usually dormant, or completely undeveloped, in the puppy stage. If your Scottish Terrier is destined for an inherited health problem, you should watch closely for symptoms around 4-5 years of age. This is considered middle-aged for Scottish Terriers, so the progression of age will bring out prevalent health conditions.

A couple of health issues that Scottish Terriers suffer from include:

This condition, caused by an imbalance of serotonin, results in full-bodied cramps, muscle lock-ups, and spasms. It can be very painful for your Scottish Terrier, and symptoms are obvious. Usually common in young puppies, this disease is incurable. Vet-prescribed vitamins and muscle relaxants help manage the symptoms.

Caused by a lack of clotting in the bloodstream, this condition results in excessive bleeding and bruising from little to no trauma. Again, this is a condition with noticeable symptoms. This disease varies in severity, so some cases may simply require blood-clotting medications, while others require a blood transfusion and hospitalization.

Other health conditions that may strike your Scottish Terrier are patellar luxation, cataracts, bladder stones, Cushing’s disease, progressive retinal atrophy, and hypothyroidism. Keep in mind that your Scottish Terrier is also prone to the health problems that are dogs are apt to develop, such as heart disease and bone cancer. The average Scottish Terrier boasts a lifespan of 12 to 15 years.

One the most inquisitive purebreds in the dog world, Scottish Terriers are known for being adventurous, brave, steadfast, and cheerful. These pups have both their positives and negatives, but one of their biggest go-to perfections is their affection towards children, especially kids they’ve been raised around. On the downside, younger children need to be taught from an early age how to handle a Scottish Terrier, or really any canine, with respect, love, and gentleness. Scottish Terriers, while tolerant and accepting of most children, have a limit when it comes to roughhousing or tail-pulling.

Scottish Terriers are some of the most loyal and protective pups, making them excellent watchdogs and night-time guard dogs. They will have a problem with other dogs, unless they have grown up with them. They can be aggressive around other pups, even bucking up against larger dogs in an obvious dominance challenge. This could be a mega-problem at dog parks as your Scottish Terrier gets older, so be sure to socialize him from the puppy stage. Dominance is bred into their nature, but it can be controlled through proper training and socialization.

The Scottish Terrier is a bit of a demanding pup with a severe independent streak. Both traits make him difficult to train. Plus, he thinks he has to be the alpha in every situation. So, he will definitely try to test your status as leader of the pack. Instead of getting frustrated, be consistent, patient, and positive in your training methods. Establish yourself as the ever-dominant alpha with a clear, strong tone to your instructional, concise voice. Your Scottish Terrier simply needs some extra direction, encouragement, and praise when he complies with your commands. It might take a few long weeks, or even months, of repetition, but your pup will eventually develop a knack for doing as you say.

When it comes to exercise, a fenced-in backyard is the best option for a Scottish Terrier. These dogs love to run and romp and explore, but they are also diggers, jumpers, and chasers. A well-placed fence in a mid-sized yard gives your pup the optimum space to go, go, go. Or, take him on long walks at least twice per day, but avoid letting him off the leash in public. Even trained, these pups are natural chasers of small animals, like squirrels, and he may bolt before you realize he’s gone.

Double-coated and dense, the coat of a Scottish Terrier requires lots of maintenance and care. Invest in both a medium-bristled comb and a firm-bristled brush. You need to comb your Scottish Terrier from head to tail first, then run back with a brush, 2-3 times a week. Luckily, these canines are non-to-low shedders, so no mess between brushes.

Scottish Terriers are healthy, robust eaters, so they could easily overeat and bring on complications of being overweight. You need to keep a good meal schedule that your pup can come to expect as feeding times. Preferably once in the morning and once at night, feed your Scottish Terrier 1 to 1 ½ cups of dry, high-quality dog food per meal.

Because each Scottish Terrier, like all dogs, is different, you should check with your vet to make sure you are feeding your pup enough. Some Scottish Terriers require more food, just as some require less.

Looking for a Scottish Terrier?

If you have your heart set on a Scottish Terrier, check the local rescue groups and animal shelters first. These pups are a bit older and more mature, but you could be providing an abandoned purebred with the second chance it needs for a happy, loving home. Adoption fees range by state and county, but you can expect to shell out upwards of $250 for Scottish Terrier. This excludes the add-on costs of vaccinations, spay or neuter, and an initial vet check-up, which could drive the cost to $500.

If you fall short at an animal shelter, browse our extensive breeder’s list for a reputable, reliable Scottish Terrier breeder in your area. On average, the cost of a Scottish Terrier puppy can range from $400 to $1,200. There are even a few breeders who specialized in Scotties of AKC qualities, driving the price to $1,400 or more.

Ranking takes into account a few basic factors including cost, skill level needed, high vs low maintenance and how critical regular training is to success. Scottish Terriers are a 2.5 on the integration scale. These pups are headstrong and independent, so they take quite a bit of time to train and socialize, even if you begin in the puppy stage. However, once you establish your dominance, command compliance comes easy to a Scottish Terrier. They would be great in a single-pet family home, especially with older children to keep them company.