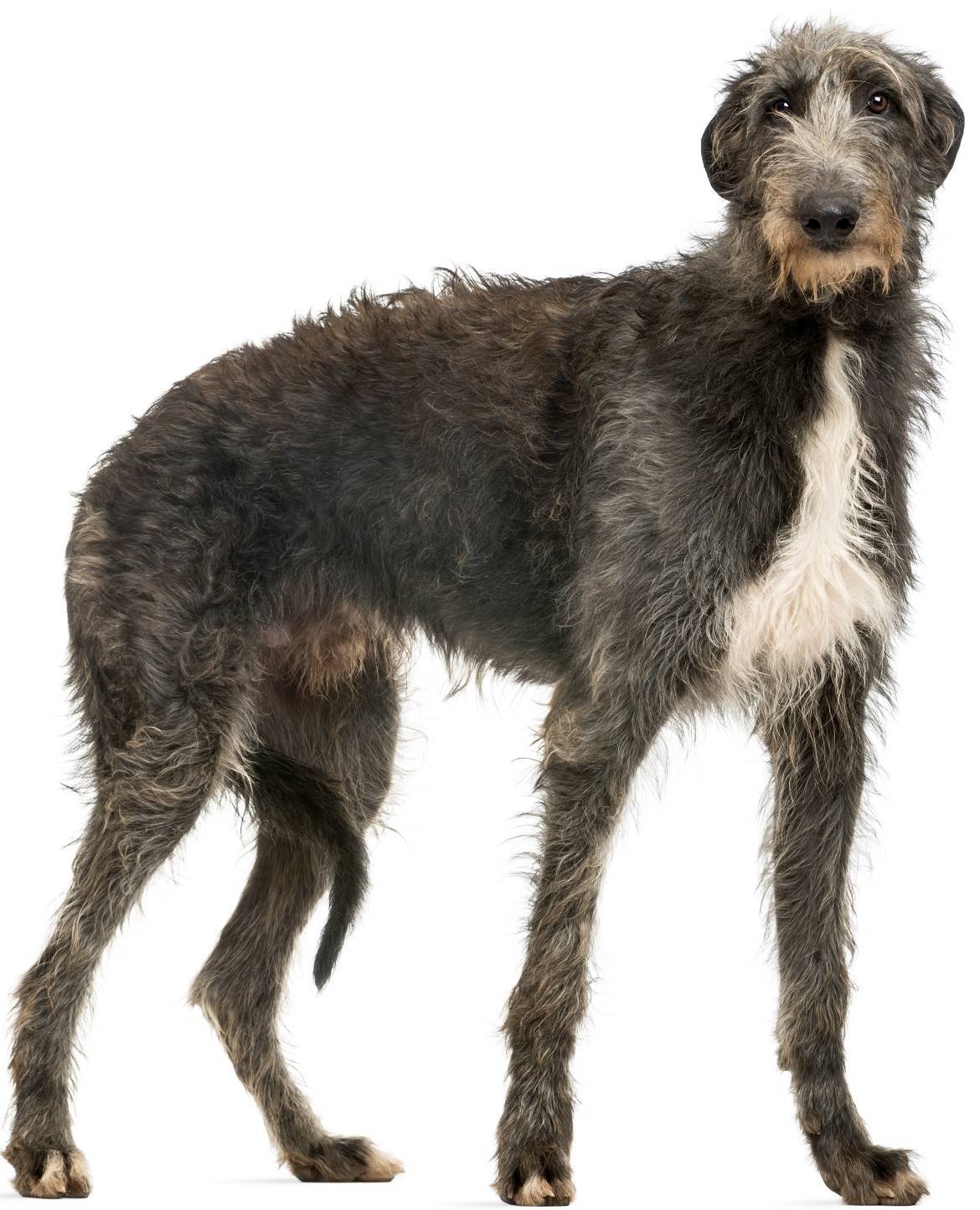 Average Life Span: 8-11 years
Scottish Deerhounds are fairly healthy dogs for a giant breed, but there are some health problems they may encounter.

Hypothyroidism, a condition in which the thyroid gland does not produce sufficient amounts of hormone, impacts some Scottish Deerhounds. Hypothyroidism can lead to issues like infertility, lethargy, hair loss, and obesity. Daily medication for the dog’s lifetime is required for adequate treatment.

Like other deep-chested large dogs, Scottish Deerhounds are prone to gastric torsion, also known as bloat. Bloat occurs when an unusual amount of air, fluid, and/or foam accumulates in the stomach. This can also be accompanied by the twisting of the stomach, which results in blocked passageways and trapped gas. Signs of bloat include gagging, shallow breathing, foamy saliva, and failed attempts to vomit. If you suspect your dog has bloat, he should be rushed to your veterinarian immediately, as it may be fatal.

Heart diseases like Dilated Cardiomyopathy (DCM) may affect some Deerhounds. DCM results in weakened contractions of the heart muscle and a lessened ability to pump. Congestive heart failure may ultimately develop as the disease progresses, but treatments are available.

Cystinuria can occur in Scottish Deerhounds when the kidneys fail to filter the amino acid cysteine, as normally functioning kidneys do. Cystinuria ultimately results in the formation of crystals or stones in the urine.

Osteosarcoma, or bone cancer, is most commonly found in larger breeds such as the Scottish Deerhound. Osteosarcoma is a very aggressive disease that spreads rapidly throughout the body. Signs of bone cancer can include joint pain, lameness, and swelling. Treatments are available, but the prognosis is still not good, and the treatments have extensive side effects.

Some Scottish Deerhounds are also prone to allergies.

The Scottish Deerhound is known for his dignified and mannerly personality. He is intelligent, observant, and polite. He is also loving and loyal, and he is courageous when needed, but he is never aggressive. He is quiet and affectionate, but at times he does have an independent and stubborn streak.

Although Scottish Deerhounds do behave calmly indoors, they are not suited for apartments, mostly due to their large size and their need for running space. Deerhound puppies are active, but they become much calmer, relaxed, and occasionally lazy as adults. Despite this slowing down, Scottish Deerhounds still need long walks or runs daily. They like to run at a fast gallop and need plenty of space to do so. For this reason, a home with a large, fenced in yard would be ideal for the Scottish Deerhound. The fence is crucial because, as a sighthound, the Scottish Deerhound is likely to take off after prey and not return. Introduce exercise to your Scottish Deerhound puppy gradually as his bones and joints continue to develop. Although your puppy may be very playful, expect your adult Scottish Deerhound to be more serious and not particularly fond of playing.

Scottish Deerhounds are friendly and affectionate towards family, strangers, children, and other dogs, although they may consider a much smaller dog to be prey. Cats or smaller pets will also be viewed as prey, and the Scottish Deerhound will chase and hunt them. Proper socialization can improve upon this issue, but his hunting instinct cannot be fully erased.

The quiet, polite Scottish Deerhound does not bark much. This is typically a good quality, but it is also important to note that he is not a good watchdog. He is large and potentially intimidating, but he is not aggressive or noisy enough to pose a threat. Some Scottish Deerhounds will not even bark at an approaching stranger.

Housetraining a Scottish Deerhound can be a bit of a struggle. Remain patient, and be sure that you are consistent with your rules and expectations. Be prepared to crate train for about four to six months before results become apparent. It is also important to socialize your Scottish Deerhound to prevent him from becoming shy with other people, as well as to somewhat tame his propensity to chase after small animals.

Your Scottish Deerhound is an independent thinker who may be mildly stubborn during training. However, he will respond well to positive reinforcement, including treats and praise. Be patient, cheerful, and willing to provide guidance. At the same time, you must firmly teach him that you are in charge and demand his respect.

The Scottish Deerhound’s short, easy-care coat requires nothing more than a quick weekly brushing with a slicker brush. Brushing once a week can help reduce your dog’s already moderate shedding.

Bathe your Scottish Deerhound as needed. He typically won’t need more than a few baths a year as long as you are brushing him regularly. Check your dog’s ears for signs of infection such as redness, tenderness, and odor regularly. Scottish Deerhound’s have fast growing nails that need to be regularly trimmed to prevent overgrowth and breakage. Brush your dog’s teeth at least once a week, but preferably two or three times weekly to help prevent bad breath and gum disease.

On average, the Scottish Deerhound should eat 3-4 cups of high quality dog food each day. Keep in mind that Scottish Deerhounds are prone to bloat, and divide his food into two meals instead of one large meal. Additionally, do not let him eat too rapidly, and ensure that he waits at least an hour after eating before getting any exercise. Do not let your Deerhound drink excessive amounts of water right before or right after eating.

Be sure that your dog always has access to clean, fresh drinking water.

Looking for a Scottish Deerhound?

The cost of a Scottish Deerhound ranges widely. Pet quality Deerhounds are available for anywhere from $600-$1800, while show quality dogs will cost as much as $3000. Pricing depends on factors such as gender, age, breeder location, and pedigree.

Ranking takes into account a few basic factors including cost, skill level needed, high vs low maintenance and how critical regular training is to success. The Scottish Deerhound ranks a 3. He is loving, polite, and friendly with most people and other dogs, he is typically quiet, and he possesses an easy-care coat. However, he does have the potential to develop serious health problems, he needs plenty of space to run, and he can be difficult to train. Housebreaking in particular can be a trying experience with a Scottish Deerhound.