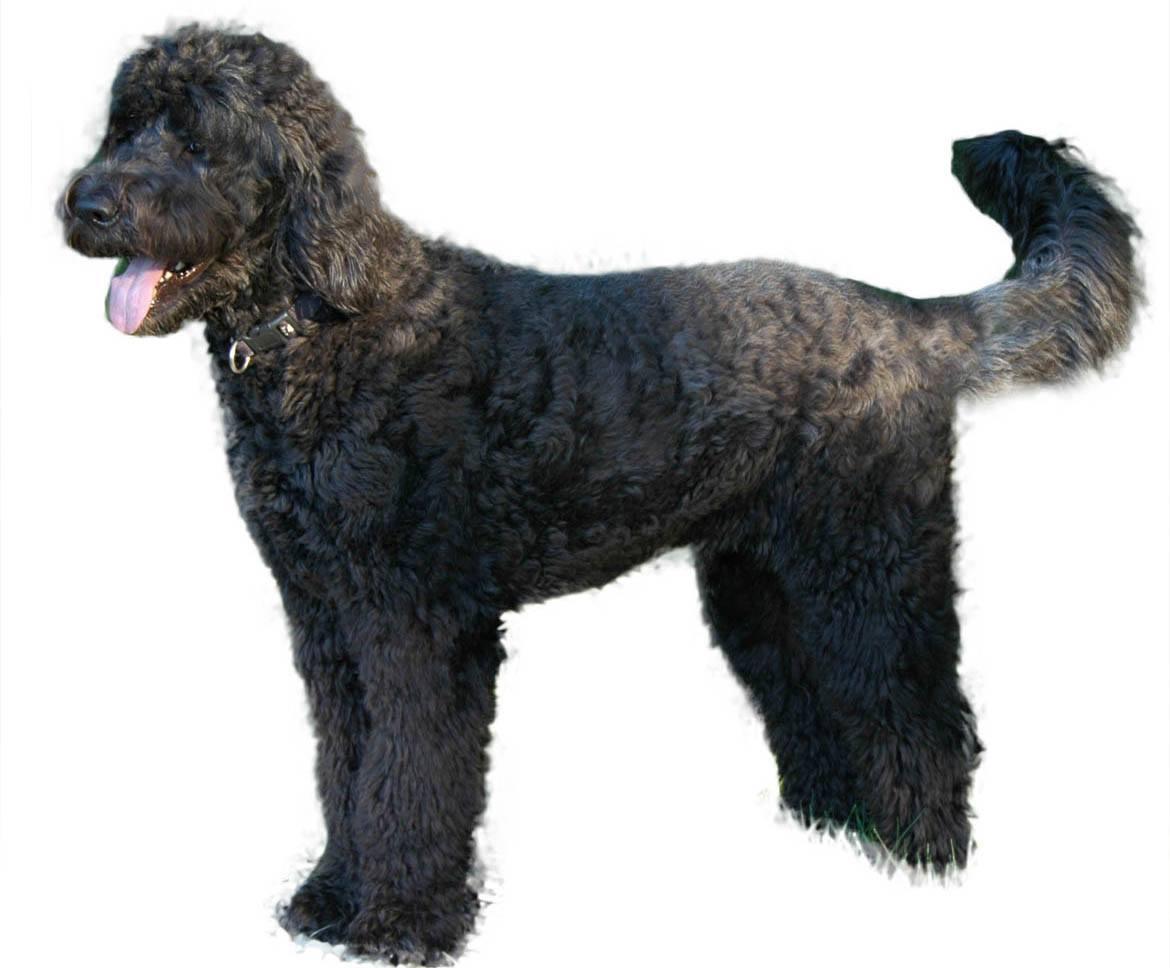 Average Life Span: 10-13 years
The Giant Schnoodle is considered a hybrid breed made up of the Giant Schnauzer and the Poodle. This breed does have some major health concerns that you need to watch out for. When it comes to health conditions, both of the parent breeds need to be looked at, as the puppy can inherit a condition from either side.

Some of the health conditions found in this breed include bloat, Von Willebrand’s, Cushing’s Disease, Addison’s Disease, Autoimmune Thyroiditis, and OCD.

Bloat is a serious condition that can lead to the fatality of your dog if it is not handled quickly. Bloat occurs when too much air or gas enters the stomach causing it to swell and place too much pressure on the surrounding organs.

Von Willebrand’s Disease is a type of bleeding disorder that occurs in dogs and is considered an inherited disease. The condition is caused by a lack of protein that is needed in the bloodstream to help platelets clot together.

Cushing’s Disease is caused from a lack of cortisone in the body that is caused from a tumor located on the pituitary gland. The symptoms related to this condition include panting, nervous system problems, increased appetite, and high blood pressure.

Another common disease found in the Giant Schnoodle is Addison’s Disease. This condition is also called hypoadrenocorticism. The disease causes a lack of corticosteroids to be released in the body, which can result in your Giant Schnoodle feeling dehydrated, weak, and depressed.

Autoimmune Thyroiditis commonly occurs in the Giant Schnoodle and is a condition where the dog’s body develop antibodies that will attack the thyroid gland and cause complications.

OCD or Osteochondritis Dissecans can occur in the Giant Schnoodle. This disease often affects the elbow, shoulder, or knee of your dog. Typically, the result is weakness or lameness in the affected limb.

The Giant Schnoodle’s life expectancy is 10 to 13 years.

While the Giant Schnoodle is a large dog, the terms used to describe this breed include protective, gentle, loving, intelligent, and playful. This Giant Schnauzer and Poodle cross breed is a wonderful addition to any home and will keep you on your toes.

If you are looking for a pup that is ready to be cautious of strangers and bark at odd noises, the Giant Schnoodle will do that for you. As a natural watch dog and protector, you will know that you are safe when your dog is around.

This breed is often known to be quite the house clown and may make you laugh for hours on end. The Giant Schnoodle does need exercise and would not make a good apartment dog. You should walk your Giant Schnoodle twice per day or allow them to run around in the yard to get exercise.

This breed is known to be destructive when left at home alone for long periods of time, so be cautious of this. It is also not uncommon for the Giant Schnoodle to latch onto and become attached to one single person over another.

Early socialization of your puppy is important to ensure that he or she will get along well with other dogs and people. The more training your Giant Schnoodle has, the easier he or she will be able to handle and manage.

The Giant Schnoodle is relatively easy to care for and does not require extensive grooming. This breed is generally considered hypoallergenic and is a great option for those who suffer from allergies.

A bathing schedule is not required, but a once a month frequency or as needed will do the trick. Ideally, you should check your dog’s ears once a week and clean them with a cotton ball to remove a buildup of dirt and wax.

If your Giant Schnoodle has the coat of a Schnauzer, you will need to make sure that you have it stripped a few times throughout the year. If his or her coat is more like a Poodle, you will need to have him or her groomed and clipped every two to three months.

In addition to grooming the coat, you will need to trim your Giant Schnoodle’s nails, as they will grow too long without a regular clipping. You should only have to cut his or her nails once a month or whenever they grow out.

Your Giant Schnoodle should be fed three to four cups of quality dog food per day. Meals should occur twice per day.

The type of food you feed your dog is important and should be made with wholesome ingredients that provide the nutrition your Giant Schnoodle needs.

Looking for a Giant Schnoodle?

A Giant Schnoodle puppy will cost you anywhere between $800 to $2,000. It is likely that you will pay more for your puppy if it is a female and depending on the breeder you choose to work with.

In addition to the cost of the puppy, you should factor in about $600 annually to have vaccines and checkups performed.

Ranking takes into account a few basic factors including cost, skill level needed, high vs low maintenance and how critical regular training is to success. The Giant Schnoodle is a great dog to own. This breed grows to be quite large and is very active. Grooming the Giant Schnoodle is considered easy and this breed is relatively healthy overall. This breed ranks a 2.5.