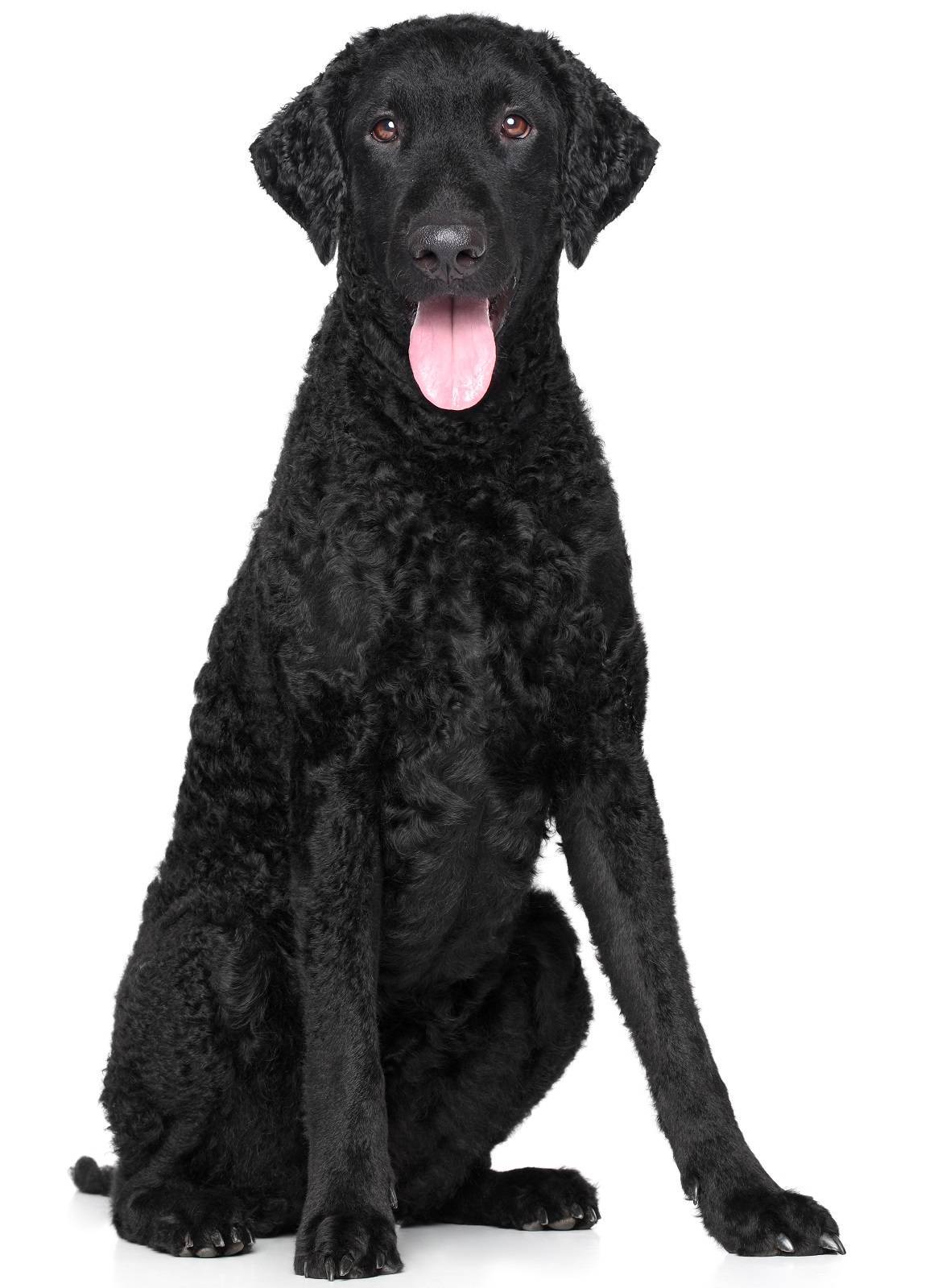 Joint problems like hip and elbow dysplasia may affect some Curly-Coated Retrievers. Hip dysplasia occurs when a malformed hip joint prevents the thighbone from fitting properly into place, sometimes resulting in discomfort, pain, and limping. In more severe cases, hip dysplasia can lead to arthritis or even lameness, and surgery may be required. Although it is hereditary, hip dysplasia can be triggered by rapid weight gain or injury. Elbow dysplasia is another degenerative joint problem. It occurs when the elbow joint is malformed and can also lead to discomfort, pain, limping, and potentially lameness. Surgery can correct severe instances of elbow dysplasia as well.

Gastric torsion, otherwise known as bloat, is another possibility for the Curly. Bloat is caused by the stomach filling with gas, fluid, or food, putting excess pressure on other organs. In some instances, the stomach also flips, trapping blood in the stomach and preventing it from flowing to the heart and other vital areas. Bloat can be deadly, so take your dog to the veterinarian immediately if you notice symptoms such as pale gums, drooling, failed attempts to vomit, difficulty breathing, or an enlarged stomach.

Another potential concern is Glycogen Storage Disease (GSD), which leads to low blood sugar, liver damage, and ultimately a premature death. Symptoms include lethargy, anorexia, weakness, and sometimes collapse. There is no cure for GSD. Low blood sugar may be treated as a temporary measure, but a dog with GSD is unlikely to survive beyond a year.

A variety of cancers such as lymphosarcoma, adenocarcinoma, fibrosarcoma, mast cell tumors, hemangiosarcoma, melanoma, and osteosarcoma have been reported among some Curly-Coated Retrievers.

Epilepsy and heart problems are becoming increasingly common to the Curly, and they may also experience pattern baldness.

The average lifespan for a Curly-Coated Retriever is 9-12 years.

The Curly-Coated Retriever is lively and extremely intelligent. He is a determined and motivated hunting dog who is both confident and proud, and he makes a good-natured, loyal family companion.

The Curly needs plenty of physical and mental stimulation to keep him from becoming bored and destructive, as well as barking a great deal. At least half an hour to an hour of exercise, training, and play daily is a must. He enjoys activities such as jogging, hunting, camping, swimming, and fishing, making him an excellent choice for an active, outdoorsy family. Indoors, the Curly knows how to relax and is typically calm and well-behaved. As a puppy, he is very playful and has a tendency to jump on people. It is important to note that the Curly-Coated Retriever typically exhibits puppyish behavior for at least three years, so he is slow to mature.

Due to his high activity levels, the Curly-Coated Retriever should not live in an apartment. A home with a large, fenced-in yard is ideal. He should live indoors with his family. The Curly loves his family a great deal and is happiest when spending time with them; he can become highly destructive if separated from them for long periods of time. The protective Curly makes a good guard dog. He is not as friendly and welcoming toward strangers as most other retrievers.

The Curly-Coated Retriever gets along well with children if they are respectful and do not pull his tail or take his food, etc. He may be too large and energetic for toddlers and very small children. He also tends to be friendly and well-behaved with other dogs and smaller pets. Unlike most typical retrievers, the Curly is somewhat reserved around strangers and needs proper socialization to prevent outright shyness. The Curly likes to nip and chew, so give him chew toys and encourage him to play with them. Keep objects you do not want him to chew safely out of his reach.

Training a Curly-Coated Retriever can be a bit of a challenge because he takes a long time to mature and will essentially be a puppy for at least three years. However, he is an intelligent working dog who simply needs firm leadership. He will try to take charge if given the opportunity, so be sure that you are absolutely consistent in enforcing your rules and expectations. Use positive reinforcement such as treats, extra playtime, and verbal encouragement. Keep sessions varied, because the Curly does not like doing the same repetitive tasks, and he is intelligent enough to move quickly through lessons.

The Curly-Coated Retriever has a dense coat covered in tight curls that typically sheds twice a year, in the spring and the fall. The especially oily coat means they are not a good choice for people with allergies.

In the fall and spring when the Curly sheds heavily, comb him with a wide-toothed comb at least twice weekly. Do not brush him when he is not shedding, because you will risk making his curly coat a frizzy mess. Also bathe him during shedding season. He should not need frequent bathing unless he gets smelly or dirty.

Trim the Curly’s nails as needed, and check ears weekly for signs of infection such as redness, tenderness, and odor. Brush his teeth at least 2-3 times weekly to maintain good overall health and prevent bad breath.

Take precautions against bloat by ensuring that he does not eat too rapidly and that he does not drink excessive amounts of water right before or right after eating. Enforce a waiting period of atleast an hour between eating and exercising, and do not let your Curly eat from a raised food bowl unless told otherwise by your veterinarian.

Access to clean, fresh drinking water at all times is important for any dog.

Looking for a Curly-Coated Retriever?

There are fewer than 150 Curly-Coated Retriever puppies registered in the United States annually, so be prepared for long waiting lists. However, the Curly is surprisingly inexpensive considering his rarity, with prices averaging around $700.

Ranking takes into account a few basic factors including cost, skill level needed, high vs low maintenance and how critical regular training is to success. The Curly-Coated Retriever ranks a 3. He is an affectionate family companion who gets along well with most people and pets, and he is fairly low maintenance in regards to grooming. However, he has a variety of potential health problems, his puppyhood extends at least three years, and he can be challenging to train. He needs a family who is willing and able to provide plenty of exercise and loving attention.