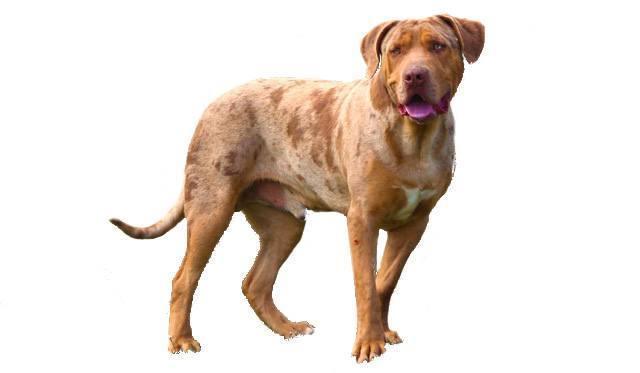 Hip dysplasia is the main health issue that may impact a Catahoula Bulldog. Hip dysplasia occurs when the hip joint is malformed, resulting in the thighbone being unable to fit properly in place. This condition can lead to pain, discomfort, and limping. In severe cases, arthritis or even lameness may occur, and surgery may be required to treat this degenerative condition. Dogs with hip dysplasia should not breed, so ensure your Catahoula’s parents have no history of the condition. Although it is hereditary, hip dysplasia can be triggered by rapid weight gain or by injury, such as falling on a slippery floor.

Catahoulas may also be prone to deafness, either unilateral (one ear) or bilateral (both ears). You can have your dog’s ears tested at a veterinarian-recommended facility. It also might be a good idea to test a puppy’s hearing before purchasing him, either by making a sudden noise or by clapping near his ears to see if he responds.

There are also a few eye problems that may impact the Catahoula: glaucoma, entropion, and ectropion. Entropion is when the lower eyelid rolls inward, chronically irritating the eyeball and potentially injuring the cornea. Entropion can ultimately lead to decreased or lost vision. Ectropion is when the eyelid turns outward, exposing the eyelid and making it highly prone to irritation. This also makes the affected dog more susceptible to corneal disease, which can lead to loss of vision.

In general, the Catahoula is a hardy breed with an average lifespan of 10-14 years.

Bred to be a hog hunter and cattle herder, the Catahoula Bulldog is laid back, but can be alert and aggressive when necessary. He is gentle, calm, and devoted, but also loyal and protective. Catahoulas are also very energetic and can be quite playful.

The Catahoula should live indoors with his family because he craves companionship and becomes dejected without it. However, due to his high energy levels, the Catahoula does need at least an hour of vigorous exercise or playtime each day. He does best in a home with a large yard that allows him to run and stretch his legs, and he does love to play. The protective, strong Catahoula is an excellent guard dog for any family.

Catahoulas are playful, energetic, and protective with children. It is still recommended to supervise interactions between the Catahoula and young children, as with all dogs. They are wary of strangers, another quality that makes them a good guard dog. Socialization is needed to ensure that the Catahoula does not become fearful or aggressive towards unfamiliar people. Some Catahoulas can get along well with dogs and other animals if properly socialized and raised with them. However, some members of this breed may never do well with other animals and will have to live in a single-pet household. Catahoulas can be quite aggressive towards dogs of the same sex. Early and frequent socialization is needed to try to prevent these behaviors.

The Catahoula is brilliant and can learn new skills quickly. However, it is important to begin his training early, because he may try to assert his independence and dominance. You must be consistent and firm, making it clear that you are in charge. At the same time, be loving and encouraging. Do not use harsh training techniques. Instead, use positive reinforcement like verbal praise, delicious treats, and extra playtime. Keep sessions short, upbeat, and challenging to hold the Catahoula’s attention. Be patient and persistent. Due to the Catahoula’s vigorous and independent nature, he is not recommended for a first-time dog owner or timid trainer.

The Catahoula has a short, glossy coat that sheds minimally. Weekly brushing is recommended to keep the coat looking neat, shiny, and healthy. Some Catahoulas may shed more than usual when they are nervous.

Bathe the Catahoula as needed, sometimes as little as a couple of times each year. Brush his teeth 2-3 times weekly, and trim his toenails regularly to prevent overgrowth and cracking. Check his ears regularly for signs of infection like redness, tenderness, and odor. Also ensure that excessive buildup of wax, dirt, or debris does not occur.

The average Catahoula should consume 1.5-2 cups of premium dog food daily. Meat should be listed as the first ingredient. The Catahoula can gain weight easily, so monitor his eating habits and weight to ensure he does not become obese. Obesity can lead to joint problems and other health issues, so preventative measures are important.

Looking for a Catahoula Bulldog?

The price for a Catahoula Dog can vary widely, but expect to pay $800 or more. If adopting a Catahoula, plan to pay up to $175 in adoption fees.

Ranking takes into account a few basic factors including cost, skill level needed, high vs low maintenance and how critical regular training is to success. The Catahoula ranks a 3. They shed minimally and are very healthy, and they are loving and protective of their families. However, they do need early socialization to prevent problems with other animals, and training a Catahoula is not always easy. They also need plenty of exercise and play, so the Catahoula is not the dog for an owner who does not have time to provide adequate exercise.